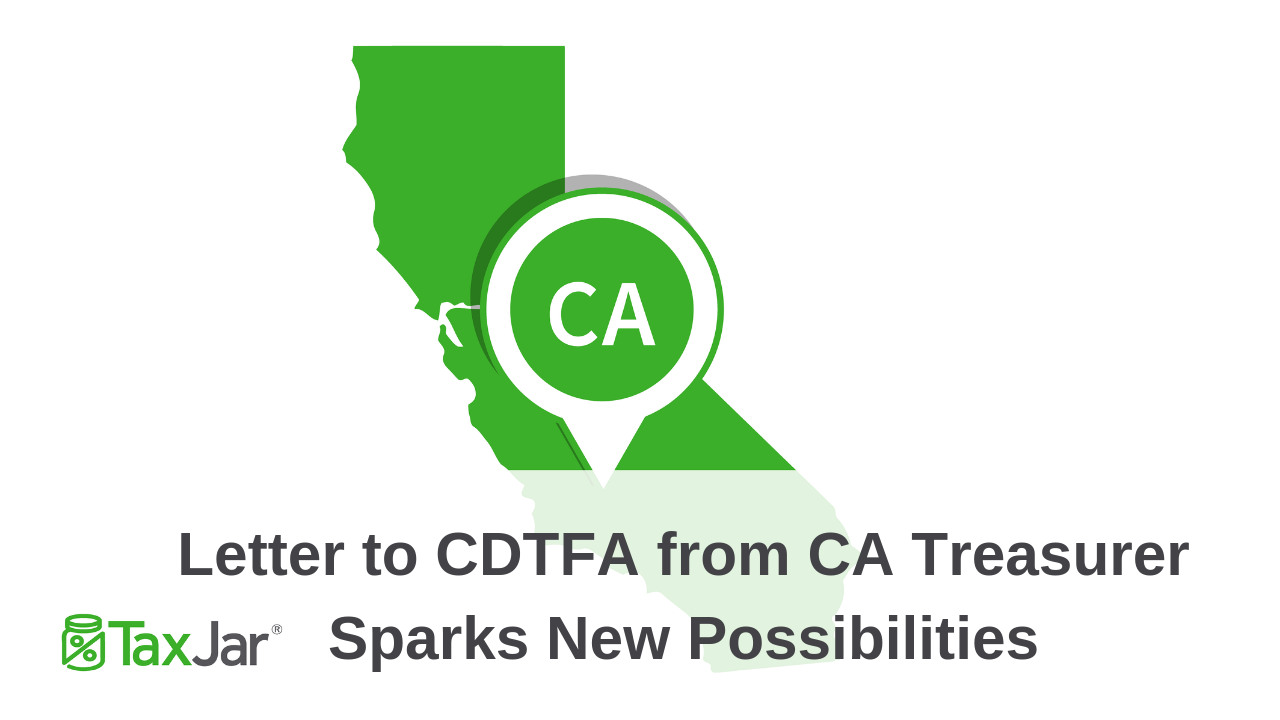 If you’re an online seller in California, you may want to take notice of a current discussion happening around third parties who collect sales tax.

Last week, Fiona Ma, the California State Treasurer, sent a letter to California Governor Gavin Newsom that has created a bit of a stir among the online seller community.

Since the South Dakota v. Wayfair decision, and even before, retailers have had to learn where they have nexus. The laws have evolved, and it’s no longer limited to having inventory or physically living in a state. For online sellers, the amount of conflicting information can be mind-boggling.

Even Ma’s letter implies that online sellers have no legal obligation to collect sales tax, and the California Department of Tax and Fee Administration’s (CDTFA) targeting of online sellers is “unlawful, unconstitutional and impractical.” But the state of California says otherwise.

To back up a bit, California sent letters to Amazon FBA sellers saying that because they had products in Amazon’s warehouses and fulfillment centers, they must now pay sales tax. The CDTFA claims these small business owners should potentially pay up to eight years of back taxes, plus penalties and interest, and are demanding they become compliant with California sales tax laws. With California having the largest economy in the United States (and fifth in the world!), this equates to thousands of business owners now having to comply.

Ma, however, strongly disagrees, saying sellers have no control over where their inventory winds up via Amazon. In her letter, she calls on the Governor to end California’s pursuit of retroactive and future sales taxes from remote Amazon sellers who have economic nexus due to warehouse inventory.

As of this date, California has not passed any marketplace facilitator legislation, whereas 10 other states have. In those cases, the marketplace (aka Amazon) collects sales tax on behalf of the sellers. Ma believes the sellers should not be liable because their out-of-state status does not equate to being a retailer under California statutes.

Where the state does have solid footing is with the current federal law. The U.S. Supreme Court’s 2018 decision in the South Dakota v. Wayfair case gave the states the ability to set their own economic definitions for remote sellers.

The decision removed physical presence as the standard for sales tax collection and opened the doors for remote sellers to be subjected to collecting and remitting sales tax based on transactions or revenue. California’s economic nexus thresholds are also somewhat low ($100,000 in sales or 200 or more transactions) considering it has such a large economy.

Because there has been no formal response from the Governor’s Office, retailers are encouraged to comply with the state in the meantime. If the Governor does reply, one of three things may happen.

If the first scenario plays out, it wouldn’t be surprising if California passed some type of marketplace facilitator legislation.

If Ma’s letter influences the governor, however, and he changes the policy for small Amazon sellers, this would be a huge win for retailers who use Amazon FBA for their business. However, given the amount of revenue at stake, we’re not sure how likely this is to happen.

For now, we have to wait and see what’s next. There could be wild excitement in favor of Amazon FBA sellers or possible crickets from the Governor’s office. It will be interesting to see if the state does make a drastic change or not. If so, will sellers launch their own lawsuits to collect registration or compliance fees they paid in the interim?

Only time will tell, but if you’re trying to get compliant in the meantime, or new to collecting sales tax in California, TaxJar recommends these steps around how to register for a sales tax permit in California. And, if you’re looking for specific sales tax advice for your business, we recommend the following sales and local tax partners.

To learn the outcome of this decision, subscribe to our blog for updates like this and other exciting sales tax news.

Please note: This blog is for informational purposes only. Be advised that sales tax rules and laws are subject to change at any time. For specific sales tax advice regarding your business, contact a sales tax expert.
33
SHARES
ShareTweetSubscribe

Sarah Craig loves to make complex topics simple to understand - like sales tax compliance. By giving you the answers you need, you can focus on your business, not managing sales tax.