Does Inventory Give FBA Sellers Sales Tax Nexus in Other States? Amazon FBA sellers ask our support team lots of great questions every day. Here’s one example of a question we get asked a lot:

I’m an FBA seller. Does my inventory in warehouses mean I have nexus in other states?

The short answer is YES.

Every state (with one notable exception) that Amazon sends your inventory to via FBA considers that inventory to be nexus. We’ll show you proof later in the post.

What the heck is nexus? Here’s an entire post that talks about it. Basically, what nexus means is a presence in a state that requires your business to comply with that state’s sales tax laws. So if you have inventory warehoused in Kentucky, then Kentucky says you’re required to comply with sales tax law in that state.

We did our homework on this. Here’s what Kansas, for example, says about your inventory and sales tax (Hint: it counts as nexus). 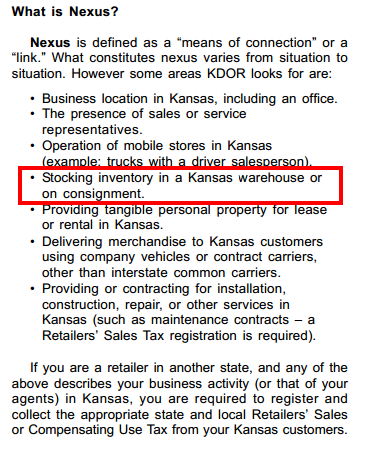 Here’s a list of what constitutes sales tax nexus in every state, including links to state laws. Every state (with the exception of New York) that has an Amazon warehouse for use by FBA says the same thing: if you have inventory here, then you also have nexus. If you have any doubt, go check out any of the states’ websites or find a sales tax professional and they’ll tell you the same.

I’ve never heard of this. Is this the new sales tax law?

No. To answer the question, inventory being considered nexus is relatively new. The reality is that states are broke. And they need more people to pay them taxes. So they’re looking at every way possible to use their laws to increase their taxpayer base. Easing the definition of nexus to include FBA sellers (as well as anyone else warehousing inventory) is just an example. If inventory counts as nexus that means more taxpayers. More taxpayers should mean more money. Insert your own joke here about how the states then go on to spend that money.

By the way, here’s more about how Amazon collects sales tax since that’s a very common question.

Questions? Feedback? Let’s chat in the comment section below. To learn more about TaxJar and get started, visit TaxJar.com/how-it-works.

Please note: This blog is for informational purposes only. Be advised that sales tax rules and laws are subject to change at any time. For specific sales tax advice regarding your business, contact a sales tax expert.
156
SHARES
ShareTweetSubscribe